The ASEAN-JAPAN Workshop on Promoting Gender Equality in Sports, a program aimed to promote gender equality in sports, was held for ASEAN countries of which the Japanese government is cooperating in the field of sports. About 70 participants selected from 10 ASEAN countries participated online.

Click here for the outline of the workshop
The workshop consisted of separate sessions: Policy Makers Workshop for the policy makers and the Young Women Workshop for the future leaders, in addition to the mixed sessions for all the participants. In the separate sessions, lectures and group discussions were held in line with the objectives and themes of each group and these were shared in the mixed session to deepen the learning of this workshop.
Policy Makers Workshop
Main Facilitator: Dr. Guylaine Demers – Professor, Laval University
Co-Facilitator: Ms. Marisa Schlenker – Sport for Development Professional with experiences of many different projects worldwide focusing on leadership development and girl’s empowerment
Assistant Facilitator: Ms. Aya Noguchi – Assistant Professor, Faculty of Health and Sports Science, Juntendo University
The Policy Maker Workshop consisted of 30 participants, three people from each country who are selected from: the central government, regional government and the Women and Sport Commission of the National Olympic Committee. The workshop started with Dr. Demers’s lecture on gender issues in sports followed by group discussion where participants shared issues and strategies/initiatives of their own countries. This workshop concluded with each country developing a policy-level action plan to increase women’s participation in sports, while incorporating the opinions and discussions amongst the countries as well as the opinions of young women into their policies.
Young Women Workshop
Main Facilitator: Dr. Lombe Mwambwa – Executive Director, National Organization for Women in Sport Physical Activity and Recreation (NOWSAPR)
Co-Facilitator: Ms. Marisa Schlenker – Sport for Development Professional with experiences of many different projects worldwide focusing on leadership development and girl’s empowerment
Assistant Facilitator: Ms. Yuiko Inoue – Co-Director, S.C.P. Japan / Barça Foundation Local Coordinator of Japan Project
The Leadership Training through Sports workshop aimed to empower young women, was attended by 29 future leaders from ASEAN countries, who are mainly active in the field of sports and two students from the Faculty of International Liberal Arts at Juntendo University. The session specifically focused on advocacy skills – skills to propose policies based on the analysis of social issues, within the leadership skills and participants were able to understand how advocacy skills relate to leadership and how to use advocacy to resolve issues. Through lectures, the participants learned about communication and skillsets that are necessary to implement advocacy, while creating their own plan of action. To conclude the workshop, participants shared what they gained and shared what kind of leader they aspire like to be (pictured in the middle row on the right).
The mixed session with all the participants was very constructive and meaningful, where the participants from the Policy Makers Workshop shared their policy development framework to the Young Women Workshop participants and received suggestions and feedbacks that should be incorporated into the national policies.
The entire workshop was conducted using a participatory approach, where participants had to think for themselves and sharing their opinion while working together. One of the participants mentioned that they had never participated in this type of workshop, so it was extremely fruitful.
How will these action plans from the workshop be implemented in each country and how will gender equality through sports be realized in the ASEAN region? The participants have left the workshop feeling hopeful and challenged for the future of ASEAN. 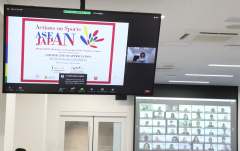 Closing Ceremony on the final day    Two students from the Faculty of International Liberal Arts Juntendo University participated in the Young Women Workshop.
Report on the Open Symposium of the ASEAN-JAPAN Gender Equality in Sports
The Open Symposium was held on the morning of August 11th, 2021 – the second day of the workshop, which was open to the public so that a wide range of people can attend (simultaneous interpretation of Japanese and English was also provided).
Click here for the outline of the Open Symposium
Opening Remarks
The co-organizer of the workshop, Sports Agency’s Commissioner Dr. Koji Murofushi, a gold medalist of the 2004 Athens Olympics gave an opening remark.

Part1 consisted of three lectures under the theme of Women & Sports in Asia.
The first speaker, Ms. Rodora Turalde-Babaran, Director of Human Development Directorate, ASEAN Socio-Cultural Community Department/ASEAN Secretariat, gave a lecture on “Why ASEAN Countries need Women’s Sports Policies?”
Followed by Dr. Etsuko Ogasawara, Executive Director of JCRWS at Juntendo University, who gave a lecture on the “Historical movement in women’s sports in Asia,” while including her own activities and initiatives.
Lastly, Mr. Jamshed M. Kazi, Representative and Liaison to ASEAN/UN Women Indonesia, presented interesting insights on the “Contribution of Sports in SDG Goals 5.”

Mr. Jamshed M. Kazi, Representative and Liaison to ASEAN, UN Women Indonesia
Part2
In Part 2, a panel discussion on “the Influence of Female Role Models,” was moderated by Ms. Aya Noguchi, Assistant Professor of Jthe Faculty of Sports and Health Sciences at Juntendo University with three panelists.
Dr. Guylaine Demers, the main facilitator of the entire workshop and winner of the IOC Women and Sport Award for the Americas, spoke from her experience as a researcher and leader in gender equality and spoke about the value of increasing the number of female role models throughout the sporting world.
Dr. Kaoru Yamaguchi, an Olympian and former JOC board member from University of Tsukuba – Department of Physical Education, and Widiasih Ni Nengah, a member of Indonesia’s Tokyo 2020 Paralympic Parapowerlifting team, spoke about her perspectives on role models and the impact that women in sports have on the society.
＊Widiasih Ni Nengah, who competed in the Tokyo 2020 Paralympic Games later this year, won a silver medal succeeding her bronze medal from the previous Games in Rio de Janeiro! 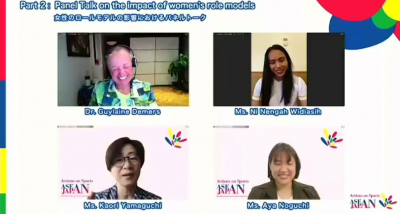 
This Open Symposium was attended by many people from various backgrounds, including sports leaders and teachers, sports organizations, international sports organizations, and researchers. In the end, more than 200 people participated in the Symposium where 40% were from outside Japan, making it a fitting audience for the ASEAN-Japan project.
During the Q&A session in Part 1, the number of questions received via chat exceeded far beyond our expectations, indicating the high level of interest in this Open Symposium both in Japan and overseas.
This project is supported by the Government of Japan through the Japan – ASEAN Integration Fund.
Back

“e-learning for Female Athletes” was featured in “GOOD HEALTH JOURNAL” at Juntendo University!